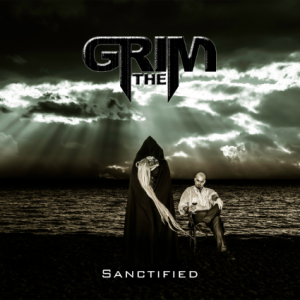 Please, find below a download link to the exceptionable album from THE GRIM. „Sanctified” will be released on Nov. 13th, 2015 on Dead End Exit Records. 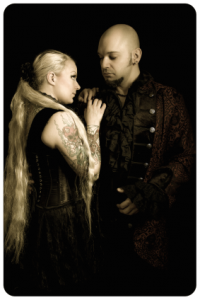 What happens if you start off making a symphonic movie soundtrack portraying your darkest
imaginations, add a ton of industrial metal and put it all together in a typical song box labeled “very personal stuff”?

“The musical design of The Grim deviates from your traditional ”Symphonic Metal” by
being backwards… With a twist; We´re not enhancing feature metal songs with symphonic scores – We´re enhancing symphonic scores with metal, while making them sound like feature songs. All cast in a dark, cinematic setting. Confused? May we introduce the term Cinematic Metal Purified!”

The backstory of composer Carl Lofvenhamn covers fairytale music for educational purposes (Liber, Bonnier), themes for Scandinavian TV shows and commercials (SVT, Viasat, TV4) symphonic intros for Swedish metal bands (Spawn of Possession, Insania et al.) as well as his most recent classical work “Anatema”- a choral war symphony in one movement. However, the journey with his favorite procreation began back in 2000, shortly after graduating from the Royal College of Music in Stockholm. He simply got tired of “all the pretentious BS associated with classical music” as he puts it himself, and soon the experimenting process started rolling. While working a lot with synthesizers and samplers in his early 20’s, the following years of occasional collaboration with various classical singers and musicians would ultimately bring Carl closer to his cinematic approach. One of those singers was the critically acclaimed opera soprano Maria Fontosh, notable for her grand performances at the Royal Opera in Stockholm, Opéra National de Paris, Opera de les Arts in Valencia et al. She later became a featured artist on the upcoming album ”Sanctified”.

By early 2013 the sound and style of The Grim was all set, but there still was some uncertainty regarding the main vocals, since Carl never intended to do them by himself. So, as he would like to put it; “like a flash from the sky”, he came in contact with Maria Storck who has quite a different background as a singer/ songwriter doing mostly rock and blues as well as conducting workshops in the vocal art of growling. According to Carl, never before had it crossed his mind that a female singer would do the job, but when hearing Maria for the first time she was simply spot on. That same fall, Carl and Maria decided to record the lead vocals together which transformed The Grim into a metal duo. At this point, “Cinematic Metal Purified” felt like the obvious term to describe what The Grim is all about in the shortest possible way.